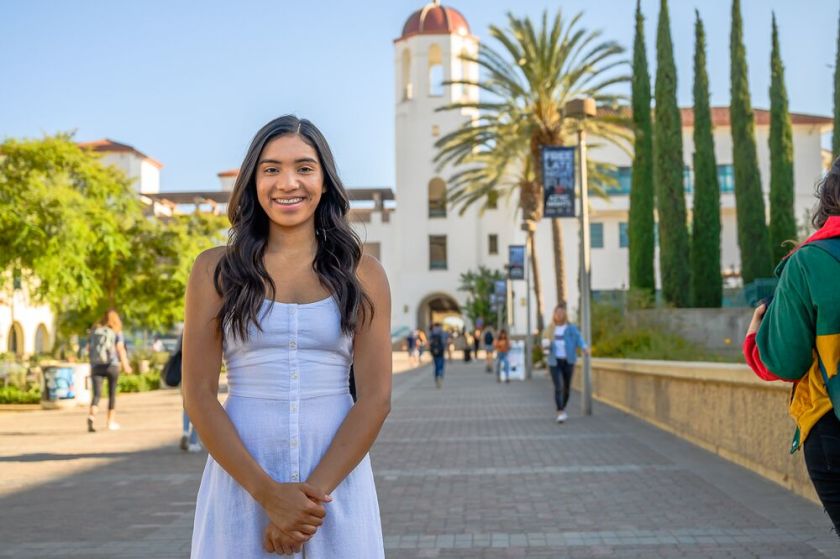 During her junior and senior years at Gonzales High School, Fabiola Moreno Ruelas wanted to go to college.  She just didn’t think she would make it.

Ruelas worried about how she would pay for college, and didn’t know if she was prepared.  Her family had experienced more than their share of hardship.  She saw her father deported, and her family routinely struggled with housing security and basic needs.  No one else in her family had attended college.

“The only stories I heard were of fellow students who had come home, had failed, got on academic probation. I really wanted to go to college, but I never thought I’d make it through,” Ruelas said.

Now a junior at San Diego State University studying political science, Ruelas is confident that she is going to succeed.  Moreover, she’s committed to helping other students in her community do the same.

Using funds she received from a car accident settlement, Ruelas launched a scholarship fund in 2019 for Gonzales High School (GHS) students.  Since the fund’s inception, she has given seven scholarships to GHS graduating seniors totaling $3,500.  In response to COVID-19, she donated $500 to purchase equipment for GHS students struggling with remote learning.  She donated $1,000 to the NAACP, SDSU chapter, to advance social equity on campus.  And this fall she is starting a new scholarship for undocumented students at SDSU.  The Education Past Borders scholarship will award two $1,000 scholarships in January 2021, for which she has already received more than 50 applications

“There are really two pandemics occurring right now: the social justice pandemic and the global health pandemic,” Ruelas said. “I am pushed by current events to make a difference and to inspire others to create change.  The purpose of my scholarship funds is to encourage education despite your background.”

Ruelas was inspired to launch her scholarship fund by the generous college scholarships she received from others in Gonzales, a town that isn’t  wealthy, but has a strong culture of supporting its students.  She also wishes she had someone she could have talked to who was succeeding in college during her years of self doubt and worry – and wants to provide that for other students in her community.

Ruelas gives credit to UC Santa Cruz’s Educational Partnership Center GEAR UP program for helping her get into college.

“The trips I took with GEAR UP were the only reason I stepped out of Monterey Bay and got a chance to see what else is out there.  I wouldn’t have known what else there is, that there is another world out there.  The first trip we took was to Hartnell College [in Salinas].  It’s only 20 minutes away [from Gonzales] but I had never been there.”

GEAR UP really made an impact for Ruelas in her junior year.

Ruelas said that GEAR UP reinforced the idea that college is for everybody.  “I started to think that maybe I could do college!” she says.

In her senior year, Ruelas decided that she definitely wanted to pursue college.  GEAR UP helped her fill out applications, made sure she took her SAT/ACT tests, and ensured that she had all the necessary information she needed.

“We would go into the [GEAR UP] room and work on applications.  The staff were so great, giving us mentorship and support,” she says.

Ruelas isn’t sure what would have happened if she hadn’t been a part of GEAR UP.  “I don’t want any student to wait until it’s too late to realize they can go to college,” she said.  “I want students to have the notion they can go, even in middle school.”

Ruelas wants other students to know that they can make it to and through college.  She started the Ruelas Scholarship Foundation and is launching the alumni network  “to help them know that there’s more out there and give them the support and information they need to step out.”

Ruelas’s scholarship fund has received national attention with articles published in newspapers across California, and even in Florida.  KSBW featured her scholarship awards on a recent newscast.

“I’m excited that it’s grown so much,”  she says. “I want to reach more students in California and keep impacting.  I want to spread the word that college is possible.”

The Educational Partnership Center at the University of California, Santa Cruz increases access to higher education for underrepresented students across the Monterey Bay, Pajaro Valley, and Silicon Valley.  The EPC is a part of the Undergraduate Education division at UC Santa Cruz and serves students and their families who face significant barriers to college-going, such as being low-income, the first generation in their families to go to college, and those whose primary language is not English.  The EPC relies upon generous community support in order to offer nine programs that, together, help more than 11,200 students each year reach and succeed in college.

“I am truly inspired by Fabiola’s story,” said Maria Rocha Ruiz, executive director of the Educational Partnership Center at UC Santa Cruz. “Fabiola embodies the mission of the EPC with her passion for making college dreams a reality for students in her community.  I couldn’t be more proud of what she is doing, and that EPC was part of her pathway.”

“The Educational Partnership Center is making a phenomenal difference in the lives of students by creating a pipeline to higher education” said Richard Hughey, vice provost and dean of Undergraduate Education (UE). “It’s a natural fit for the EPC to be a part of UE.  When I hear stories such as Fabiola’s, I am reminded of how supporting the EPC creates opportunities for underrepresented students to access college and succeed once there.”